Growth in North America driven by discounts and mobile commerce

The US retail e-commerce market is one of the largest in the world, accounting for 20% of global sales. In the US, 9% of retail sales in 2016 were made online, equating to US$451bn. Despite these large shares, e-commerce will grow by another 15% in 2017, and will be driven increasingly by mobile commerce and retailers discounting products year-round to drive sales.

Double-digit growth will continue until 2021 according to eMarketer’s forecast. Mobile is a key driver of e-commerce growth in North America. In 2017, m-commerce will account for 34% of e-commerce sales in the US, ahead of Canada’s share of 29%. Consumers increasingly feel comfortable using a mobile device to shop; during Amazon’s Prime Day in 2016, mobile app orders more than doubled compared to 2015.

European e-commerce growth to be the slowest globally

The UK is a clear e-commerce leader in Europe, with predicted sales of US$110bn in 2017. E-commerce sales are predicted to grow at a faster rate in the UK (15%) than in other Western European countries in the 2017-2021 period.

Μobile commerce will drive this growth, accounting for 37% of e-commerce sales in Germany and 27% in France.

A slower growth in e-commerce will be seen in the rest of Europe: e-commerce sales in Central and Eastern Europe will reach US$43bn in 2017, accounting for just 4% of retail sales. E-commerce’s share of retail sales will continue to be low throughout the next five years, reaching only 5% by 2021.

Buyers in Asia Pacific continue to increase their spending on e-commerce platforms. In 2017, retail e-commerce sales will total US$1.4tn, an increase of 30% compared to 2016. Even in countries like Japan, where retail sales have stagnated, e-commerce continues to grow. Higher internet and mobile usage has enabled consumers to purchase more frequently, while retailers have improved their shipping and delivery methods to extend their reach in the region. Retail e-commerce sales will continue to grow through the forecast period, more than doubling to US$3tn by 2021.

Very slow growth in e-commerce is predicted for the Middle East and Africa – online shopping will represent just 2% of total retail sales in the region in 2017 and this figure will not increase significantly up to 2021. Thus far, e-commerce activity has been hampered for socio-economic reasons and by consumer concerns about data security, a preference for paying in cash and unreliable shipping. Amazon’s acquisition of Souq.com – the region’s largest e-commerce platform – may spur e-commerce growth in the Middle East.

Who are the major e-commerce platforms?

The 2016 cross-border e-commerce shopper survey, conducted in 26 countries, revealed that Amazon, eBay and Alibaba accounted for 65% of all cross-border purchases. There were also significant differences by country, indicating that the global e-commerce market is diversified. However, as Amazon, eBay and Alibaba expand their reach to new markets, the global e-commerce landscape may become more consolidated in the coming years.

When we look at South and East Asia –the region where e-commerce has the fastest growth– the lion’s share of e-commerce is owned by home-grown players such as Alibaba and JD.com in China and Flipkart in India. While Amazon and eBay failed to enter e-commerce market in China, they have managed to establish a significant footing in the still-developing Indian market. For many smaller markets in the region (e.g. Thailand, Singapore and Vietnam), the dominant e-commerce platform is the Alibaba-owned Lazada.

In Europe, Amazon is the leading platform in France, Germany and the UK –these markets also seem to be the company’s testbed for delivery innovations. In Poland, only two foreign platforms (Zalando and AliExpress) made the top 10 list of e-retailers – the Russian e-commerce market is also rather focused on domestic e-retailer. On the other hand, in Italy only two out of the top 10 list are domestic e-retailers, with Amazon and eBay being the clear leaders in Italian e-commerce. 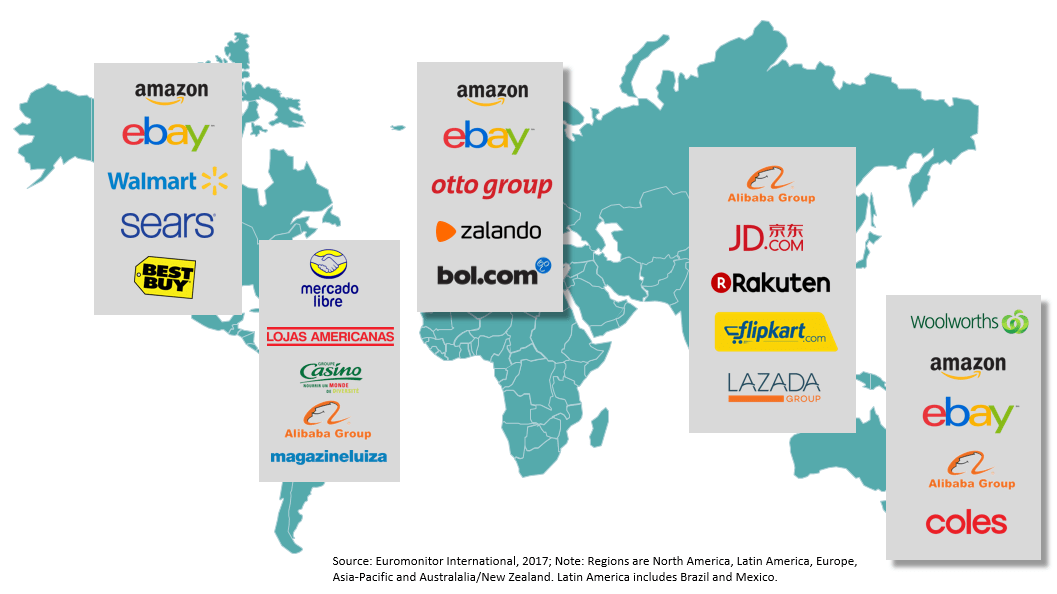 M-commerce is dominant in Asia-Pacific

South Korea will rank third in m-commerce share, with mobile generating 59% of retail e-commerce sales in 2017.

The fragmentation and difficulty of the payment process is one of the leading obstacles to e-commerce growth, especially in parts of Asia, the Middle East and Africa. It is an even greater barrier to cross-border e-commerce, due to national differences in payment methods.

Despite being the major e-commerce growth area, the Asia-Pacific region is arguably the most varied globally in terms of payment options used. This creates a major challenge for e-retailers and delivery providers.

While China’s e-commerce transactions, for example, are heavily dependent on digital payment options (e.g. Alipay, WeChat Wallet), India will see 45% of its digital sales completed by Cash on Delivery (COD) in 2020 according to eMarketer. Many other developing Asian countries – such as Indonesia, Thailand and Malaysia – also rely heavily on COD payments.

Credit cards seem to be the preferred payment method in the most developed economies. Countries where credit card payments were most popular were Japan, Singapore, South Korea, Italy, Norway, Argentina, Brazil, Canada and the US.

In 2017, China and the US will generate the most retail sales of any country worldwide. China will surpass the US in 2018 to become the world’s largest retail market by total sales, and its continued gains will help drive worldwide growth throughout the forecast period. E-commerce is the key driver behind China’s retail growth.

In terms of regional e-commerce sales share distribution, the main development between 2017 and the forecast for 2021 is that Asia Pacific’s regional share will increase to reach two-thirds of global e-commerce, while North America and Western Europe’s share shall decrease accordingly. This is a continuation of the trend seen between 2010 and 2017.

In 2015, the cross-border e-commerce market accounted for US$300bn in Gross Merchandise Volume (GMV), about 15% of e-commerce overall. According to a report from DHL, this rapid growth will continue: the cross-border market is expected to grow by about 25% annually until 2020 – nearly twice the growth rate of domestic e-commerce. In 2020, it is expected to account for about US$900bn GMV, translating into a roughly 22% share of the global e-commerce market.1 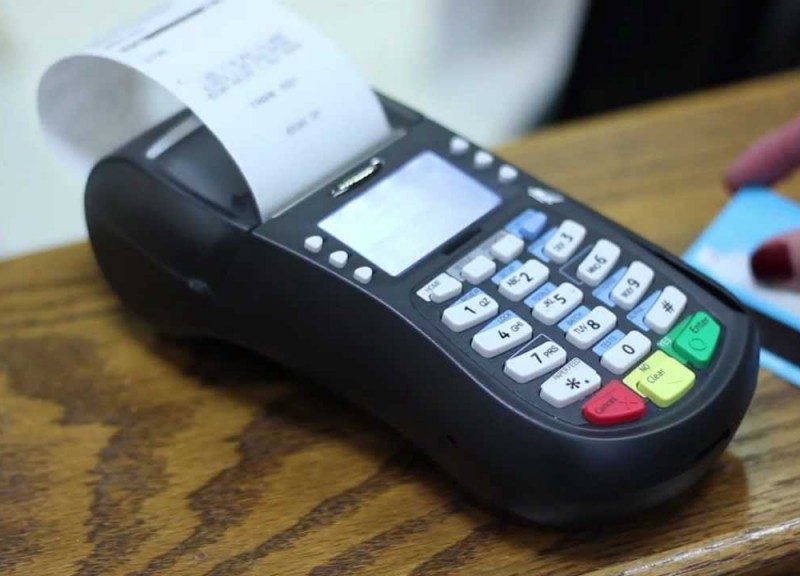 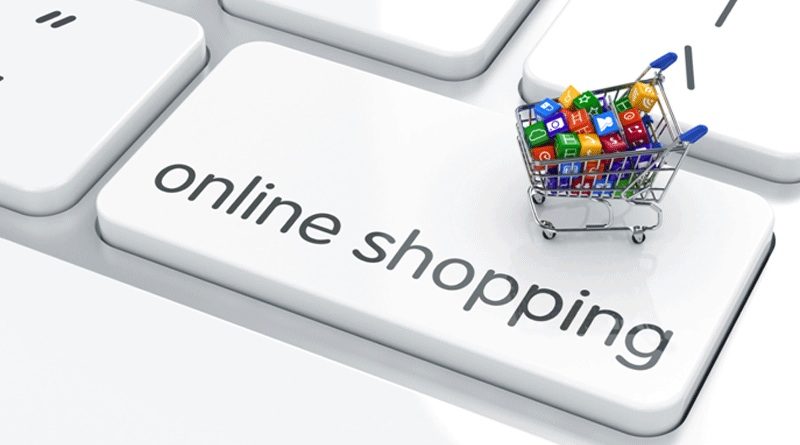 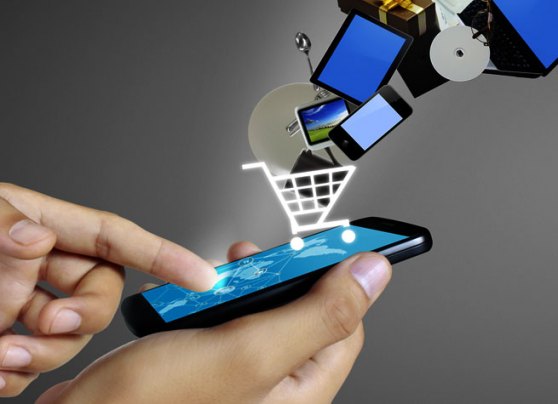