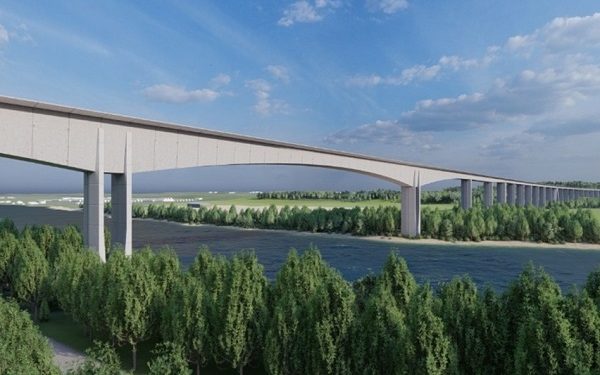 LTG Infra, the company responsible for the implementation of the Rail Baltica project in Lithuania, has signed a works contract with the Italian company Rizzani de Eccher for the construction of the Rail Baltica railway bridge over Neris near Jonava. The contract was signed following the conclusion of the Government’s National Security Commission (NSK) confirming the compliance of the Italian company with the interests of national security.

The value of the transaction is almost EUR 64 million excluding VAT.

“The railway bridge over Neris is an exclusive construction of Rail Baltica not only in engineering and technical aspects. This object is especially important for the implementation of the project in the construction of the railway towards the Latvian border — it will transport no less than 50-meter-long rails, which can only be carried by rail,” says Karolis Sankovski, CEO of LTG Infra. The estimated duration of the Neris bridge works is 2.5 years.

„We are honored and proud to be awarded the contract which will allow us to bring all of our bridge engineering and construction skills and experience to an important and challenging project for Lithuania’s rail infrastructure network”, says Rizzani de Eccher Group’s CEO Franco Alzetta.

The new railway bridge will be the longest not only in Lithuania, but also in the Baltic States. Its length will reach even 1510 meters. The bridge will cross the Natura 2000 site of the European ecological network, which is why particular attention is paid to environmental protection. In order to avoid any impact on the biodiversity of Neris, work in the protection zone of the river Neris will not be carried out during fish migration and spawning. When designing the bridge, invasive solutions in the riverbed were abandoned – bridge supports will not be built in water, so a distance of as much as 150 meters will be maintained above the river between the supports, therefore, fish will be able to migrate freely, and water vegetation will be able to grow.

The bridge will be built near the city of Jonava, so noise barriers -noise absorbing walls, vibration dampers, special embankments- will be installed in residential areas.

The company that won the tender for the construction of the bridge will also have to take care of all the infrastructure of the bridge as well as the nearby infrastructure. The drainage system, electricity, telecommunications, water supply networks will be reconstructed, the nearby district road will be repaired by building an intersection leg, as well as landscape will be managed.

Technical maintenance services for the construction of the Rail Baltica railway bridge over Neris near Jonava will be provided by Viamatika, which won the tender announced by LTG Infra last year.

Rail Baltica is the largest railway infrastructure project in the history of the Baltic States, which will provide an electrified double-track European gauge railway line along the entire Rail Baltica route, connecting Warsaw, Kaunas, Riga and Tallinn. The total length of Rail Baltica in the Baltic States is 870 km, with 392 km in Lithuania, 265 km in Latvia and 213 km in Estonia.