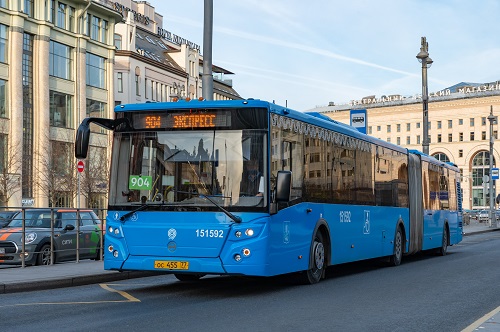 It’s been 10 years since the launch of the first express bus route in Moscow. Express routes run on dedicated lanes with a minimum number of stops. Thanks to this, the average speed of the buses increases in 20% which makes express buses fast and convenient public surface transport in Moscow.

The first high-speed route No. 901 was launched in Moscow 10 years ago. Nowadays, it carries more than 12 thousand passengers from Zagorye to Taganskaya Square. In a decade 350 million people have chosen express trains — this is almost 2.5 times more than the population of Russia. Express routes are fast and convenient, because the intervals between them do not exceed 10 minutes. There are 15 express bus routes which are owned by Mosgortrans which is the main operator of the urban surface public transport of Moscow.

«The high-speed surface urban transport is an integral part of the life of a large metropolis. It is extremely important for every passenger to move around the city quickly and effortlessly. Today there are 15 expresses in the city, which are used by 130 thousand people daily. Such transport is highly appreciated among passengers: since 2011 express buses have transported 350 million people», — said Maxim Liksutov, the Deputy Mayor of Moscow for Transport.